De Lima filed Senate Bill (SB) No. 1897 seeking to faithfully comply with the constitutional mandate to ensure the autonomy of local governments by amending Article 10 of Republic Act (RA) No. 7924, or “An Act Creating the Metropolitan Manila Development Authority, Defining Its Powers And Functions, Providing Funding Therefor And For Other Purposes.”

“The MMDA, a non-LGU, seems to have been receiving its share of the IRA, which should be reserved exclusively for the LGUs by virtue of the devolution under the Constitution. This is likewise clear in the Local Government Code,” she said.

“Granting the MMDA with an IRA diminishes the constitutionally guaranteed right of LGUs of their just share of national taxes, and undermines the principles of equity and local autonomy espoused by political decentralization and enshrined in the 1987 Constitution,” she added.

In filing the measure, De Lima stressed that the 1987 Constitution vested LGUs with the power to generate their own revenues via local taxes, fees and revenues but legislators had limited the IRA of LGUs to national internal revenue taxes.

It may be recalled that this was eventually challenged in Mandanas v. Executive Secretary Ochoa, claiming it omitted other sources of revenues, such as franchise fees and customs duties, which the national government withheld from LGUs.

Eventually, the SC ruled in favor of the Mandanas petition and determined that the “just share” of LGUs shall be sourced from “all national taxes and not only national internal revenue taxes”.

“This victory for LGUs cannot be fully enjoyed because a review of the status quo implementation of the IRA would reveal that even the [MMDA] get a slice in the limited pie – thus significantly reducing the share of each LGU from the scarce resources available,” De Lima lamented.

De Lima, Chairperson of the Senate Committee on Social Justice, Welfare and Rural Development, maintained that she proposed for the MMDA’s share of the IRA to be removed from its Charter not to undermine MMDA’s contribution in managing NCR but to guarantee that LGUs will receive their equitable share of national taxes.

“Excising the IRA from MMDA’s funding is well within reason as they will still have other sources of revenue as enumerated in the very charter that created it, and also because they already receive an annual budget appropriation as an attached office under the Office of the President,” she said.

If passed into law, De Lima said her proposed bill would rectify what may have been a legislative oversight when the MMDA was granted a share in the IRA under Section 10 of RA No. 7924.

“It is respectfully submitted that the funds that MMDA requires to effectively carry out their mandate must be duly appropriated. However, to award this agency with its own share of IRA would be to perpetuate a legal anomaly that should be duly corrected by legislation,” she said. (30) 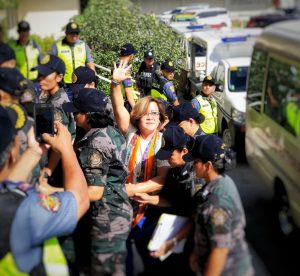